Which “extremist groups” are doing that?

It’s telling they start out with someone the Anti-Defamation League has pegged as a “white nationalist,” and it’s interesting that Fuentes is of Hispanic descent on his father’s side.”  Conflating “racists” with Constitutionalists is a go-to tactic of the left, which conveniently forgets that judging the worth of people by the group they were born into instead of as individuals is at its core collectivist in nature. If he is what they say he is, he shares that with them.

In any case, it’s actually irrelevant to a reaction to the threat of unprovoked violence against innocent religious believers. What WaPo is doing here is an old propagandist trick—conflating legitimate self-defense with vigilantism and criminal violence. We saw the term used against George Zimmerman (also called a “white Hispanic” to imply racism), we saw it used against Kyle Rittenhouse, and we’ve seen it used against citizens defending their neighborhood against looters after a hurricane.

In the examples the influential paper chose to highlight, the posters were not calling on initiating violence against their political opponents. They were calling on supporters of churches and pregnancy centers to defend themselves against violent attackers with mayhem on their minds.

And WaPo is taking this tack in spite of also reporting:

“One post on a far-left channel called for burning all churches except Black ones. ‘Only Black churches should be left standing. Burn them all,’ one post read.”

“Bring rifles” under these circumstances hardly sounds “extreme.” It sounds prudent. What’s the alternative? What is billionaire Jeff Bezos’ newspaper telling us? Evidently, both sides are equally culpable following the Supreme Court’s decision, and “disinformation and social media manipulation” are creating “a tinderbox situation.”

We’re to believe the “vigilantes” calling for defending churches are overreacting and spreading hateful hysteria.

In the interests of not being gaslighted by the same establishment interests that tell us any doubts about COVID or questioning of the legitimacy of Joe Biden’s election are “baseless” and bordering on treason, let’s go straight to “the news.”

“A man who allegedly attacked a police officer with a ‘makeshift flamethrower’ during Friday night’s abortion rights demonstration in downtown Los Angeles has been arrested and is facing possible charges for attempted murder,” KTLA reports.

“Fire at Colorado pregnancy center being investigated as arson in wake of Roe v. Wade reversal,” KKTV 11 News reports. “If abortions aren’t safe, neither are you,” the graffiti spray-painted on the building with an Antifa symbol threatens in a repeat of what is turning out to be a slogan of the left.

A similar threat was made across the country. Per Fox News:

“The Montpelier Police Department released a photo Saturday showing graffiti at the front entrance of the Vermont State House reading: ‘If abortions aren’t safe, you aren’t either’ – the calling card of the pro-choice militant group known as Jane‘s Revenge.”

Have you heard of these freaks?

“The DHS memo specifically identified a far-left ‘network of loosely affiliated suspected violent extremists, known as ‘Jane’s Revenge,”’ that it said was linked to several threats calling for a ‘night of rage’ over the ruling,” the WaPo report that has the nerve to take the “far-right” to task for arming up admitted. “DHS said the group allegedly claimed responsibility for vandalizing a building that houses a Congress member’s campaign office and an antiabortion group, and for at least three arson attacks since May targeting antiabortion organizations in Oregon, New York, and Wisconsin.”

So Fuentes and the Telegram channel weren’t being paranoid after all for advising their followers to arm up?

Adding insult to injury, Live Action News via WND reports on a pregnancy center in New York that was firebombed a few weeks back and “tagged with the message ‘Jane was here,’” and then investigated by the state for not giving up “invasive information”!

In another report, WND notes the Satanic Temple is insisting “TST members should be permitted a religious exception to perform TST’s religious abortion ritual.” Whether drinking fetal blood is considered a “sacrament” was left unsaid, but the development certainly adds a provocative “company they keep” dimension for considering what the opposing sides on the issue are about.

“Historic Catholic church in West Virginia destroyed in suspected arson,” Catholic News Service reports, as if in answer to that consideration. And that leads us to the bipolar contention from the Vatican’s editorial director that being pro-life means being pro-gun control, disregarding the Vatican’s armed-to-the-teeth Swiss Guard and the Vatican’s Pontifical Council for Justice and Peace, which in 1994 declared:

“In a world marked by evil and sin, the right of legitimate defense by armed means exists. This right can become a serious duty for those who are responsible for the lives of others, for the common good of the family or of the civil community.”

Speaking of evil and sin, a Reddit statement was recently posted on (and taken down from) Twitter urging urban lefties to make their way to rural areas and make war on Christians. My first reaction was that it was posted as a sick joke, but our government is the authority that instructs us “If you see something, say something.” 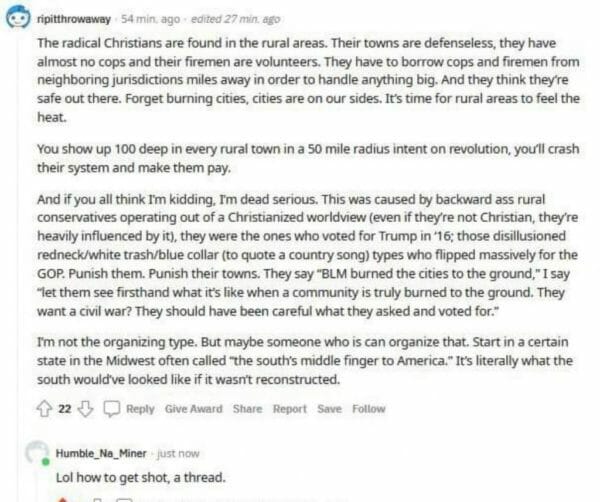 Do you think they’ll investigate, or is this provocateur one of theirs (again), setting up the low-hanging fruit so they can come off as heroes in the headlines?

And God help you if you have an American flag or a cross or Catholic statue visible from the road. Yeah, “Bring rifles” sounds about right. Even if The Washington Post wants to portray that as an extremist call for violence…

Speaking of which, if the federal government is prosecuting people for allegedly egging things on at the Capitol, how’s this for a “responsible” headline in today’s agitated political climate from a  major network?

“There’s another War Between the States coming over abortion.”

David Codrea is the winner of multiple journalist awards for investigating/defending the RKBA and a long-time gun owner rights advocate who defiantly challenges the folly of citizen disarmament. He blogs at “The War on Guns: Notes from the Resistance,” is a regularly featured contributor to Firearms News, and posts on Twitter: @dcodrea and Facebook.

Once Again for Gun Controllers in the Back: It’s the Criminals