Florida – -(Ammoland.com)- We’re tired of waiting. We’re tired of hearing empty promises and accepting compromises by politicians. We’re tired of donor money from the likes of Al Hoffman and Mike Fernandez, who benefit from gated communities and private security, standing in the way of the Constitution.

There simply is no valid reason for the citizens of Florida to be deprived of exercising the right to keep and bear arms as a true right.

No state that has adopted constitutional carry has either rescinded or regretted that legislation.

“Yes, I support Constitutional Carry and I would vote for it if it made it to the floor of the Senate.” – Wilton Simpson

“I would have no problem with a Senate Committee Bill authorizing Constitutional Carry. That would be fine with me.” – Wilton Simpson

“Anyone that has told you that I’ve told any Senators not to file a Constitutional Carry bill is lying to you.” – Wilton Simpson

“President Simpson is unwavering in his support for the Second Amendment rights of law-abiding Floridians.” – Katie Betta, Simpson spokesperson

Senator Simpson can easily prove his “unwavering support” for the Second Amendment. Tell him that Floridians want constitutional carry now! No more delays, no more excuses, no more double talk.

As Senate President, Simpson does not have to wait on a bill to get to the Senate floor. He has the power and authority as Senate President to direct any Committee Chairman to file a committee bill.

We urge Simpson to facilitate the end of the ongoing denial of our Constitutionally protected rights.

If you believe a license requirement to exercise a fundamental, enumerated right incorporated against the states under the Fourteenth Amendment due process clause is constitutionally repugnant, and agree with SCOTUS Justice Thomas that the Second Amendment is a “disfavored right”, please take the time to send your message to Senate President Simpson to get it done.

All you need to do is click the link below. Enter any additional comments you wish, however, please be polite and remember, you’re communicating with the Florida Senate President. Your comments represent the gun-owning/carrying community at large, so please govern your comments accordingly.

Florida Carry Board of Directors

Florida Carry is a Florida nonprofit, non-partisan, grassroots organization founded in 2010. Florida Carry is dedicated to advancing the fundamental civil right of all Floridians to keep and bear arms for self-defense as guaranteed by the Second Amendment to the United States Constitution and the Constitution of Florida. In 2016 Florida Carry was named the Grassroots Organization of the Year by the Citizens Committee for the Right to Keep and Bear Arms.

Florida Carry, Inc. was organized in order to better coordinate activities, effectively lobby the state legislature, and to provide a legal entity capable of filing suit to demand compliance with state and federal law. Florida Carry stands to represent our members, millions of gun owners, and the countless knife and defensive weapon carriers of Florida. We are not beholden to any national organization’s agenda that may compromise that mission. Florida Carry is the state’s largest independent second amendment advocacy organization. 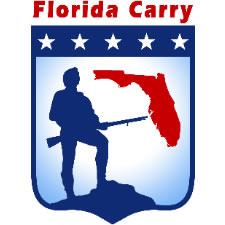 The Solution To Mass Shootings Is & Always Will Be Armed Citizens