USA – -(AmmoLand.com)- Nothing defines dismal failure so much as the billionaire-bankrolled gun control crusade that has been unfolding in Washington State since 2014, when the first of two restrictive anti-gun-rights citizen initiatives was put on the ballot with promises of reduced gun-related crime and tighter control over who has access to firearms.

That much is made abundantly clear in this year’s report on crime in Washington, released a few days ago by the Washington Association of Sheriffs and Police Chiefs (WASPC). The report for 2020 relied on data from 233 state, county, municipal, and tribal law enforcement agencies statewide.

The WASPC report highlighted a significant piece of data: Between 2016 and 2020, the Evergreen State saw an overall homicide increase of 66.9 percent.

This includes a murder that occurred days ago in the upscale City of Bellevue, formerly a suburb of Seattle but now a thriving city in its own right, and where homicide is a rare occurrence. But this case is important for several reasons because the details amount to a refutation of the gun control extremism put forth in recent years by the Seattle-based Alliance for Gun Responsibility, the organization backed by contributions from Michael Bloomberg and former Microsoft billionaires including Bill and Melinda Gates, Steve Ballmer and the late Paul Allen.

In 2014, the Alliance spent more than $10 million to push through Initiative 594 against relative token resistance from gun rights groups including the National Rifle Association and a coalition of state-based organizations, plus all but one of the state’s major law enforcement organizations. They were simply out-spent, and many contend media bias played a role.

It is no wonder why a group called WaGuns.org created a T-shirt a few years ago bearing the message “Gun Control is Not Gun Safety” 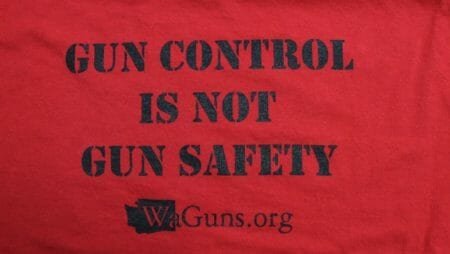 I-594 is the so-called “universal background check” measure that requires background checks on every firearm transfer, including private sales and even loans of guns, with a few exceptions for family members. It passed with just under 60 percent of the vote and was supported by anti-gun state officials and many Democrat lawmakers.

Four years later, in 2018, the Alliance put its deep pockets to work again with Initiative 1639, which invented a definition for a “semiautomatic assault weapon” and prohibited anyone under age 21 from purchasing such a firearm, even if it is a .22-caliber rimfire. There is also a safe storage requirement, which brings the focus back on the Bellevue murder. In this case, which appears to be a domestic violence incident, the suspect broke into his brother’s gun safe and stole the handgun used in the slaying. The suspect, in this case, could not legally possess a firearm due to past criminal history, which clearly illustrates the argument from I-1639 opponents that the measure would not keep guns out of the wrong hands.

The Bellevue killing, combined with data published in the 583-page WASPC report confirms these gun control measures have not lived up to their sales pitches.

As noted above, data from the 2016-2020 period is significant because it begins two years after passage of I-594 and begins with the first full year of a special “gun violence tax” adopted by the Seattle City Council in mid-2015. That tax was supposed to raise money specifically to be spent on “gun violence reduction programs” in the city, but instead of homicides going down, they have crept upwards, from 19 killings in 2016 to 52 last year, according to Seattle Police Department data.

In 2016 there were two high-profile shootings that resulted in eight fatalities. One of those cases involving a 19-year-old who legally purchased a Ruger semi-auto sporting rifle to kill three people was used to justify the I-1639 campaign in 2018. The other shooting involved another young adult who stole a semi-auto rimfire rifle from his stepfather’s house to murder five people in a shopping mall only a few months after the triple slaying.

Statewide, according to data from the annual FBI Uniform Crime Report, the entire state hasn’t benefited from the restrictive gun control measures at all.

It is interesting to note that the WASPC report lists 206 murders in 2019. AmmoLand News reached out to WASPC for an explanation about the discrepancy, but the organization did not immediately respond.

Adding to the problem, the WASPC report shows a decline in the number of commissioned law enforcement officers per 1,000 population in the state. Seattle has lost more than 250 police officers since last year’s riots and demands for defunding police departments became stylish among the Jet City’s far-left city council members and the protesters with whom they clearly sympathized.

Washington’s population, according to the WASPC report, is 7,656,066. A lot of those people have been buying guns and applying for concealed pistol licenses. Over the past two months, more than 7,000 new CPLS have been issued, and the trend is heading toward the all-time high of more than 650,000 back on April 1, 2020 when law enforcement agencies suspended taking new applications because they require fingerprinting. This was done despite there being no provision in the state statute that allowed it.

As noted by Alan Gottlieb at the Bellevue-based Second Amendment Foundation, “As municipal police agencies see their budgets cut, their morale sinking and their officers leaving, private citizens will increasingly be taking care of themselves and others.”

Predictably, Washington newspapers and broadcast news agencies are giving token coverage to the report and ignoring altogether the failure of gun control initiatives to fulfill their expectations.

Dave Workman is a senior editor at TheGunMag.com and Liberty Park Press, author of multiple books on the Right to Keep & Bear Arms, and formerly an NRA-certified firearms instructor.

Iowa RKBA Constitutional Amendment on the Ballot for 2022

Lessons We Learned and Forgot About Defending Our Schools