Posted 27 days ago by admin in Gun Rights News 9

U.S.A. –-(AmmoLand.com)- VoteVets is a hybrid political action group that operates as both a PAC and a Super PAC by donating money directly to political campaigns and by raising and spending unlimited amounts of cash for “independent expenditures,” such as ad campaigns that target conservative candidates and issues while supporting liberal issues and politicians.

The organization operates two groups, the VoteVets PAC and the VoteVets Action Fund. Its stated mission is to “to elect veterans to public office,” but in actuality, it only backs liberals. All of the candidates VoteVets supports for federal, state, and local offices are Democrats, and all of the issues it supports promote a liberal agenda.

Since it was formed in 2006, VoteVets has spent more than $120 million. Nearly half went for radio and television ads. According to FactCheck.org, VoteVets receives money from the Democrats and Bloomberg:

“The PAC’s top three donors in 2018 were the Senate Majority PAC, the House Majority PAC and Bloomberg L.P. The organizations contributed $4.5 million, $2.2 million and $1.5 million, respectively.”

While pretending to advocate on behalf of veterans and veterans’ issues, in reality, VoteVets operates in lockstep with other anti-gun groups funded by Bloomberg’s cash. To be clear, VoteVets advocates for more anti-gun laws and restrictions even though most veterans own guns and strongly support the Second Amendment.

While VoteVets does fund lobbying efforts, it is the group’s liberal public-issue campaigns – which are usually not fully disclosed or attributed – that the mainstream media laps up like hungry dogs.

“They have really been punching above their weight this election cycle,” Rachel Maddow, MSNBC’s highest-paid news actor said of VoteVets.

The Washington Post and scores of other newspapers recently published an opinion column, which was actually just the latest VoteVets public-issue campaign.

The headline was damning: “3 retired generals: The military must prepare now for a 2024 insurrection.”

“The signs of potential turmoil in our armed forces are there. On Jan. 6, a disturbing number of veterans and active-duty members of the military took part in the attack on the Capitol. More than 1 in 10 of those charged in the attacks had a service record. A group of 124 retired military officials, under the name “Flag Officers 4 America,” released a letter echoing Donald Trump’s false attacks on the legitimacy of our elections,” the column states.

It called on the Department of Defense to take “more intensive intelligence work at all installations.”

The column followed a similar bit of anti-Trump 2024 fearmongering, which was published by Newsweek, titled: “Millions of Angry, Armed Americans Stand Ready to Seize Power If Trump Loses in 2024.”

What the Post and the other media platforms that republished the syndicated column did not tell their readers was that the entire piece was little more than VoteVets’ ongoing political agitprop, and that two of the three generals are thinly veiled political activists, and apparently far more interested in partisan politics than they ever were the welfare of the troops who served under their command.

The newspapers never mentioned that after he retired in 2006, Major General Easton strongly criticized the Bush Administration on multiple media platforms for its handling of the Iraq War. Nor was it disclosed that he served as a special advisor to both Hilary Clinton’s and Barack Obama’s presidential campaigns.

In 2004, Major General Taguba was assigned to investigate allegations of mistreatment at Iraq’s Abu Ghraib prison. His report, which was extremely critical, was almost immediately leaked to the media. The stories served as an inspiration for the Iraqi insurgency and, ultimately, cost American lives. It is still a rallying cry for our foes throughout the Middle East. After the leak was investigated, Taguba was ordered by the Army’s Vice Chief of Staff to retire. This fact, too, never made it into print.

VoteVets has a long history of advocating for more gun control.

In 2012, VoteVets chairman Jon Stolz wrote a scathing op-ed column about the Trayvon Martin case, titled: “Shoot First Laws: Even troops in war zones can’t do that.” Stolz’s column, which was widely republished, excoriated “Stand Your Ground” laws in Florida and other states.

“The Trayvon Martin case has gripped the nation and forced the country to re-examine our gun laws. But the horrible affair has struck me in another way, because of my two tours in Iraq,” Stolz wrote. “One fact stands out in my mind: The ‘Stand Your Ground’ law in Florida, which may let George Zimmerman off the hook for the killing of Martin, gives more leeway to shooters than our own military gives to soldiers in war.”

The problem with Stolz’s column is that his premise is 100% wrong. The Trayvon Martin shooting was never a “Stand Your Ground” case. Zimmerman never invoked the immunity the statute provides. Stolz’s subsequent comparisons between Florida’s “Stand Your Ground” law and the military’s Rules of Engagement were completely moot.

It was the first time a Colorado lawmaker had ever been recalled.

In 2018, VoteVets barnstormed across the country with Gabby Giffords’ anti-gun group.

We’re hitting the campaign trail with @VoteVets! Ahead of this year’s election, @ShuttleCDRKelly will travel across the US to support veteran candidates with the courage to fight gun violence in Congress. Learn more👇 https://t.co/6CiVBYPiUa

“For a long time, Democrats have been playing defense on issue of gun safety,” Dan Helmer, VoteVets vice-president told a McClatchy newspaper. “We see a trend across the country where, increasingly, the American people are demanding change.”

VoteVets and Giffords both said veterans made “especially good messengers for policies that restrict access to guns.”

“They have the ‘platform and credibility’ to talk about the issue,” Helmer said. “No one more than vets know just how deadly some of these weapons can be. Nor have others proven so dedicated to defending the country.”

Giffords and VoteVets called the candidates they supported “part of a new generation of leaders challenging gun-lobby backed politicians.”

“Military veterans know that weapons of war have no place in our schools, in our places of worship, at concerts, at night clubs and in our communities. Too many in Congress are afraid to take on the NRA and pass meaningful legislation supported by the overwhelming majority of Americans to reduce gun violence,” Helmer said in a joint press release. “The veteran candidates we are meeting with on this tour have already answered the call of duty once and bravely stood up to defend and serve this nation. They have the courage to stand up to the NRA and fight for legislation to protect our communities from the epidemic of gun violence. We are proud to partner with Captain Kelly and Giffords on this tour.”

According to its Facebook page, VoteVets claims to be “the first and largest progressive group of veterans in America.”

“We represent over 1.5 million veterans, military families, and their civilian supporters,” the site states.

However, the issues posted on Facebook and its other social media accounts reveal that the group is far more aligned with the Democratic Party than any veterans’ community – even a progressive one. 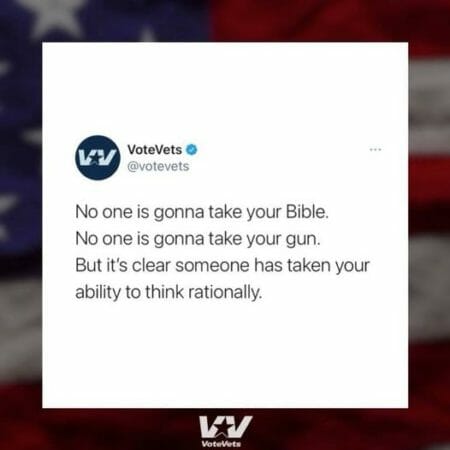 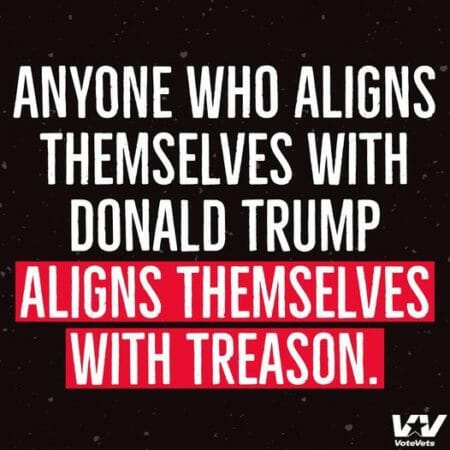 To be clear, VoteVets regurgitates nothing but liberal talking points rather than advocating for veterans as it claims.

It’s no secret why anti-gun groups believe veterans would make good messengers for their rhetoric. Veterans have the credibility that they never will. Unfortunately for Giffords, Brady and Bloomberg, most veterans are too politically savvy to fall for their anti-rights shenanigans.

Besides, every veteran I know owns guns – every single one. While I’m sure there are some who don’t, I’ve never met one, but I’ll admit I tend not to run in those circles. Vets, especially those who served in the combat arms, understand the importance of being able to defend themselves and their families, which is why they are such strong protectors of the Second Amendment.

VoteVets has its supporters, of that I am sure, but the group doesn’t speak on behalf of the vast majority of veterans, and they certainly don’t speak for me. Quite frankly, I find what they’re doing – pushing a liberal agenda under the guise of advocating for veterans – sickening. It’s time for them to stop pretending they’re working on our behalf.

This story is presented by the Second Amendment Foundation’s Investigative Journalism Project and wouldn’t be possible without you. Please click here to make a tax-deductible donation to support more pro-gun stories like this.

Lee Williams, who is also known as “The Gun Writer,” is the chief editor of the Second Amendment Foundation’s Investigative Journalism Project. Until recently, he was also an editor for a daily newspaper in Florida. Before becoming an editor, Lee was an investigative reporter at newspapers in three states and a U.S. Territory. Before becoming a journalist, he worked as a police officer. Before becoming a cop, Lee served in the Army. He’s earned more than a dozen national journalism awards as a reporter, and three medals of valor as a cop. Lee is an avid tactical shooter.