U.S.A. –-(AmmoLand.com)-– At SHOT Show I spoke with Kel-Tec engineer Ryan Williams. One of the primary interests was getting a first look at the new Kel-Tec P15 subcompact 9mm pistol. It is said to be an updated version of the P11, which pioneered sub-compact polymer 9mm pistols. The P11 held ten rounds in the magazine, as I recall. I had a P11 for a while, not long after they first came out. For whatever reason, I sold it. A light pistol has more recoil impulse. I opt to carry a bigger pistol most of the time. The new P15 weighs in at 14 ounces in the polymer frame version. An aluminum frame version will be available for more money. The P15 has a 4-inch barrel, better than many sub-compacts. The Kel-Tec P15 has a suggested retail price of $425. The pistol pictured is an aluminum frame model, with a suggested retail price of $725. Both are expected to be available in 2022.

Things that stand out with the P15 are a small size, 6.6 inches long, comparable to a Walther PP, the lightweight, the trigger, the grip safety, and the sights/optic.

Much of pistol shooting is subjective. People find a platform they like, one that fits them well, that points well for them. I found the P15, with the included extended 15 round magazine, to fit his hand very well. The trigger was surprisingly good. It had a very smooth, about a quarter of an inch take-up, with a nice, crisp release, at a guesstimate of about a 4 lb trigger. I think I could shoot the pistol well, especially if optical sights were installed as on the pistol at the display.

The factory front sight is indexed with the notch in the optic, giving a good backup sight. I was skeptical of the Kel-Tec introduction of a self-defense striker-fired pistol into a crowded field. I was pleasantly surprised at how well the Kel-Tec P15 was handled. The ergonomics felt well thought out. The grip safety could be disconnected if desired, but it worked well at the Kel-Tec display. The status of the grip safety and the magazine disconnect can be selected by the user. There is a small screw on the right-hand side of the frame. Turning the screw to one of three positions makes the selection. In one position, both grip safety and magazine disconnect are engaged. In the second position, both are disengaged. In the third position, only the grip safety is engaged. 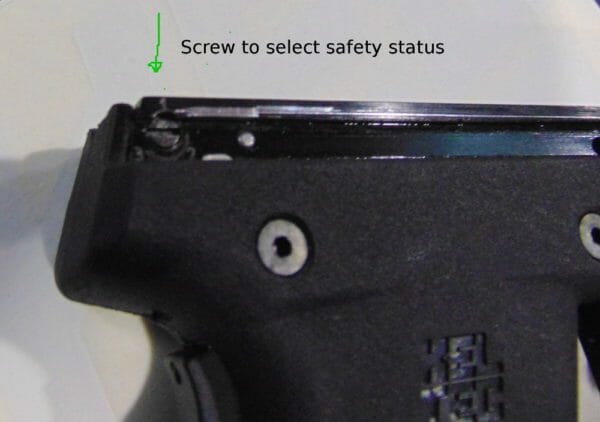 While the hot firearms market has shown signs of meeting demand, most product is still flying off of the shelves.

The P17 sub-compact .22 pistol has been another top seller in the Kel-Tec line. Initial, pre-production models had problems. Kel-Tec spent a few months working them out. Now the reviews are glowing. The P17 and the P15 make a natural pair, even though the magazine release is different for the two.

Two years ago, Kel-Tec had a target of production of 2,000 P17 pistols a week. Due to supply chain problems, they have averaged closer to 1,000 P17 pistols a week over the last two years. When the company that produces the magazine bodies cannot obtain the plastic to make the magazines, you are limited in how many pistols you can sell. 100,000 pistols is a great run for any handgun. The demand for the P17 has not let up.

The high demand means it is difficult to find one at the suggested retail price of $199. Online auction sites have had them bring more than twice that amount.

Kel-Tec Engineer Ryan Williams reported they have caught up with the backlog for the CP33. They are appearing on dealers’ shelves at close to the suggested retail price of $475, including two 33 round magazines.

The CP33 Is purchased months ago has been an outstanding pistol. It is very accurate. One-inch groups off a rest, with optical sights, are common at 25 yards. It is light by “old” standards. It has been reliable if cleaned about every 200 rounds. It is a joy to shoot. It, like the P17 .22. is suppressor-ready. It is easy to take down and clean.

Kel-Tec pistols are made and designed in the United States. Their innovations are legendary. If the P15 does as well on the range as the P17 and the CP33 have done, Kel-Tec will have another winner on their hands.