Assemble a Pistol First, On an AR15 Receiver

HomeGun Rights NewsAssemble a Pistol First, On an AR15 Receiver

U.S.A. –-(AmmoLand.com)-– The AR15 platform has become the most popular platform to assemble firearms in the United States. It is popular for pistols, rifles, shotguns, and short-barreled rifles.

When the end user has a choice, this correspondent contends the firearm should be assembled as a pistol first. It gives the end-user the most flexibility going forward.

By “assemble”, this correspondent means to connect an upper receiver, with a barrel,  to a lower receiver to make a firearm. Depending on how this is done, the end result can be either a pistol, a rifle, a short-barreled rifle, or a shotgun. Potentially, a short-barreled shotgun could be assembled, but this correspondent has not seen commercially available uppers with short shotgun barrels. Uppers for pistols, rifles and short-barreled rifles are commonly available as firearms parts and may be ordered through the mail, without a federal firearms license.

Lower receivers, which contain the fire control mechanism for the AR15,
are considered legal firearms. The upper receivers, with the barrel, bolt, and buffer tube, are not.

Lower receivers which are sold by FFLs without uppers are recorded as “other” firearms on the form 4473. This is because the final configuration of the firearm is not known. In the ATF record keeping, they are counted as miscellaneous firearms. From the May 18, 2022 release by the ATF, page 21:

The categorization of an AR receiver, rifle, pistol, or other is dependent on the ultimate configuration by the end-user.

The order in which an AR15 is assembled makes a critical difference. If you use the lower receiver to make a pistol, then the pistol can be reconfigured into a rifle without any problem, and back to a pistol.

If you put a barrel shorter than 16 inches on a rifle, you will have made a short-barreled rifle, which requires the $200 tax and the ATF forms. Unless you have paid the tax and filled out the forms, do not make short-barreled rifles. It is against the law, with a potential of ten years in prison.

If you put a barrel shorter than 16 inches on a pistol, the pistol remains a pistol.

This correspondent suggests the most flexible thing to do, is to make the receiver into a pistol first. Then it can be switched back and forth from pistol to rifle as desired, simply by mating the desired upper with the desired lower, and ensuring that no stock or vertical fore-grip is attached to a firearm in pistol configuration. A buffer tube is not a stock. At present, a pistol brace is not a stock.

The court ruled as long as the end-user did not assemble the stock with the short barrel, no tax or ATF forms were required. From United States  v. Thompson Contender :

Respondent manufactures the “Contender” pistol and, for a short time, also manufactured a kit that could be used to convert the Contender into a rifle with either a 21-inch or a lO-inch barrel. The Bureau of Alcohol, Tobacco and Firearms advised respondent that when the kit was possessed or distributed with the Contender, the unit constituted a “firearm” under the National Firearms Act (NFA or Act), 26 U. S. C. § 5845(a)(3), which defines that term to include a rifle with a barrel less than 16 inches long, known as a short-barreled rifle, but not a pistol or a rifle having a barrel 16 inches or more in length. Respondent paid the $200 tax levied by § 5821 upon anyone “making” a “firearm” and filed a claim for a refund. When its refund claim proved fruitless, respondent brought this suit under the Tucker Act. The Claims Court entered summary judgment for the Government, but the Court of Appeals reversed, holding that a short-barreled rifle “actually must be assembled” in order to be “made” within the NF A’s meaning.

a short-barreled rifle “actually must be assembled” in order to be “made” within the NF A’s meaning.

There is no legal upper limit on the length of a pistol barrel. 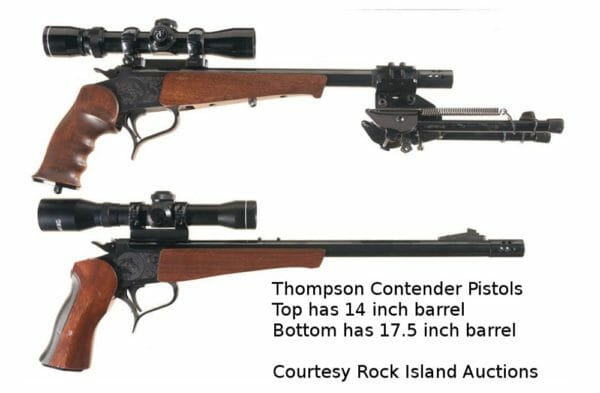 Pistols with 16 inch barrels, or longer, are fairly common and legal. 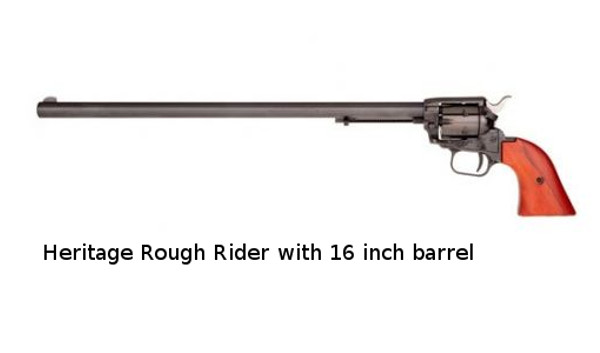 A stock may be placed on a pistol with a 16 inch barrel, making it a legal rifle. To prevent it from being a short barreled rifle, the overall length has to be more than 26 inches. The Heritage Rough Rider, originally a pistol, can be made into a rifle, and returned to being a pistol.

The original Colt “Buntline special” was shipped with a removable shoulder stock.

The sequence is important. If the ATF accuses you of possessing a short-barreled rifle, without a stock, you need to be able to show the firearm was not purchased as a rifle. Given the proliferation of “other” receivers, having the receiver shown as “other” on the 4473 is likely to be critical.

The author is not a lawyer. The above is not legal advice. To the best of the author’s knowledge, it represents the current state of definitions according to the ATF and the courts.

Dean Weingarten has been a peace officer, a military officer, was on the University of Wisconsin Pistol Team for four years, and was first certified to teach firearms safety in 1973. He taught the Arizona concealed carry course for fifteen years until the goal of Constitutional Carry was attained. He has degrees in meteorology and mining engineering and retired from the Department of Defense after a 30-year career in Army Research, Development, Testing, and Evaluation.

Once Again for Gun Controllers in the Back: It’s the Criminals